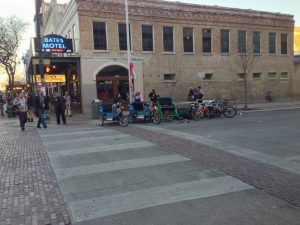 The secrete has been out for some time now, Austin is the coolest place in America! It’s also one of the fastest growing metro areas in the country. So here at ATX Surf we decided to write up a cheat sheet for all the newbies to the area.

The ATX locals love to complain about how bad the traffic these days. Compared to Dallas, Houston, or other big cities it’s not that bad. It is a lot worse than it used to be, and seems to get worse every year. There are two major Highways that run north\south. I-35 on the east side, and the MOPAC on the West side. Both of them can get bumper to bumper just about anytime for no good reason, and they are frequently slammed during rush hour. A trip from Round Rock to S Austin can take over an hour sometimes. I always check my phone\traffic to see if there is a wreck on either of these highways, and take the other one if needed. You can cut over east and west to each one relatively easy, even during rush hour.

UT Traffic, the traffic lets up considerable in the summer time when UT lets out of school. Keep this in mind.

ATX Locals are really bad at driving in the rain. The local schools will shut down with just a hint of rain or sleet and temperatures below 40. It doesn’t actual have to snow to get a snow day in Austin.

The roads can flood very quick and shut off areas of town. Pay attention to the flood gates. People die every year trying to cross them in their cars. Heavy rain can shut down car travel.

Housing
Houses, Condos, and just about anything in the center of the city is very expensive. There are some bad parts of town still, with crappy houses that are also expensive. The East side used to be reasonable, but it’s now filled with hipsters, condos, and no longer very affordable. Reasonable housing is out in the sub burbs.

There area handful of lakes created by the Colorado River. Lake Austin, Lady bird, and Travis are major destination for fun. You can also live out near the bottom part of Lake Travis and commute into Austin. If your stupid rich you can afford a house one or near Lake Austin.

NO UBER!
Uber has left the ATX. You have to try some of the other knock off services or use cabs. The buses and other public transit systems are not the best either.

Pedi Cabs
They are super fun and a big part of the downtown bar culture. But rides are expensive, and they can’t take you out of the bar district

Other Random Stuff
Many of the tech business are up North, not downtown.

It’s easier to find a job on the North side of the city, and more of the family fun stuff like Top Golf, Main Event, etc. are also located in the North Part of the City.

You can find a sweet house that has a lot closer\easier commute to downtown in the South Part of the City. That is why I live in SW Austin, but the restaurant are pretty lame there.

The major events of the year are SXSW, ACL, Formula 1 Races, and UT Football games

ATX is the only city with “Moontowers” still in operation.

There is Live Music every night downtown,… but many of the iconic venues have moved, shut down, are have been harassed by their new condo neighbors to the point the music scene has suffered.

The dive bars and other stuff that mad Austin famous for being “weird” are quickly disappearing.

The are Vinaryds and other really cool small town out in the hill county. Fredrickburg is the romantic wine tasting destination of choice.

There are several rivers with tubing and other fun stuff. The Guadalupe is the biggest\party destination. It’s also a really great river for fly fishing.

Galveston is 3 hours away and the closest beach. The town is cool, the beach in town isn’t very nice. If you head south, the beached get better.

You can camp all by yourself on a secluded beach, if you have the gear to make it to North Padre Island, it’s about 5 hours away.

The Alamo is little over an hour away in San Antonio, there is also a six flags and a sea world there.